The ABC’s of American Spelling: Best and Worst Spellers by State

For many Americans, it’s been a long time since spelling was taught or we competed in spelling bees. And despite spelling being taught at a young age, many people still struggle with certain words or are just horrible spellers- a sure flaw if they want to win Wordle. But what words is America misspelling, and how do Americans feel about autocorrect and spell check?

We analyzed Google searches for which words were most searched (and misspelled) nationwide and surveyed over 1,000 Americans on their opinions on spell check and spelling more generally. Here’s what we found:

One of the quickest ways to double-check spelling is to use Google, and we found people in some states need more help spelling common words than others. Maryland would lose first in our United States Spelling Bee, as residents here Google spelling more spelling words per capita than any other state. Colorado, New York, New Jersey, and Virginia round out the top five states searching the most for how to spell words. Louisiana, meanwhile, seems less concerned about spelling, with the lowest amount of Google searches related to spelling.

What words were the most popular in each state? Popular words include conscientious, quarantine, and hors d'oeuvre, with congratulations also coming out as surprisingly difficult to spell. 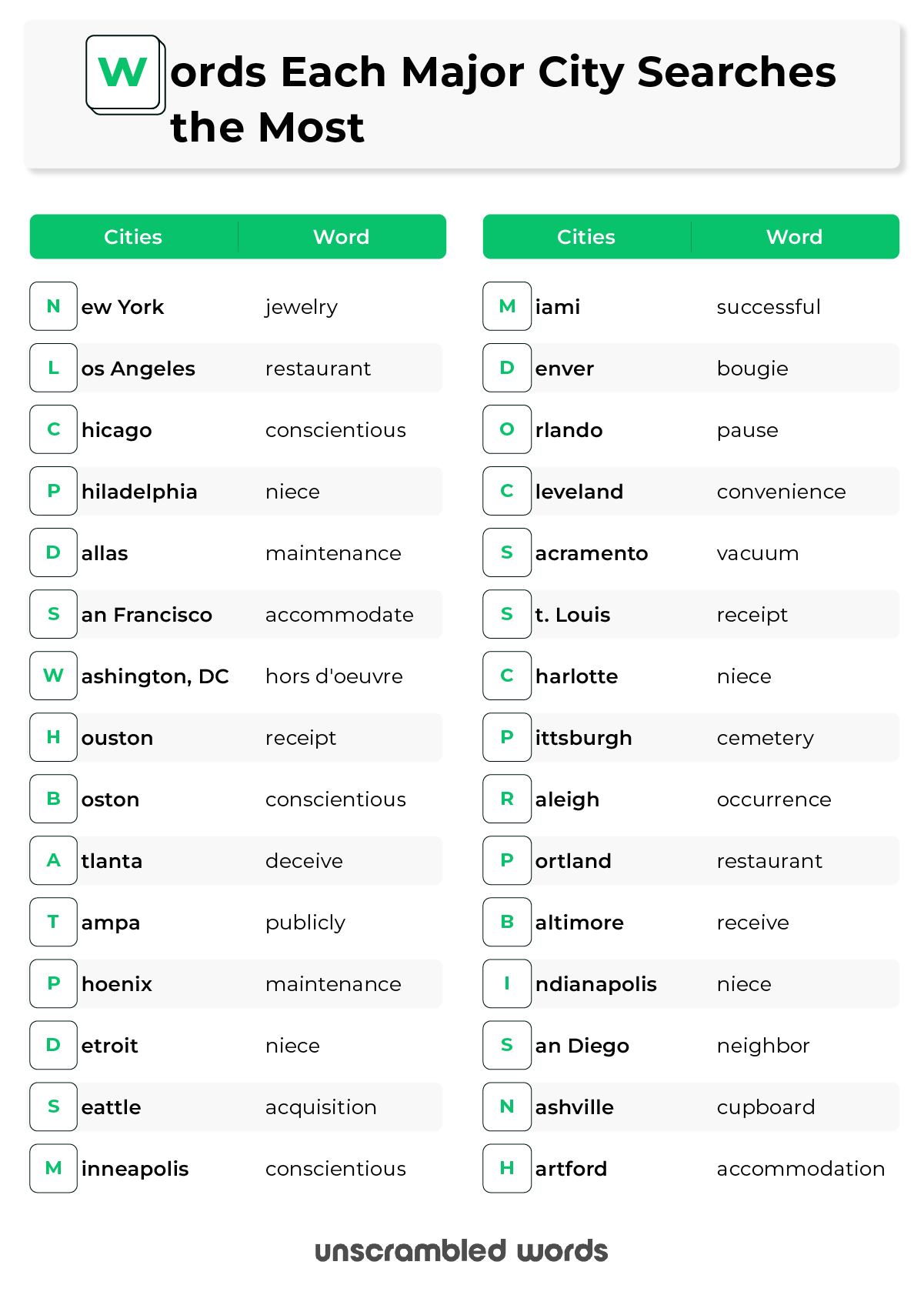 What spelling snafus haunt the dreams of our metropolises? New York, despite the success of Uncut Gems, struggles with spelling “jewelry.” Chicago, ever the epitome of Midwestern nicety, struggles with “conscientious,” while Los Angeles seems to keep searching for the right spelling of “restaurant.” Denver, meanwhile, just wants to know how to spell “bougie.” 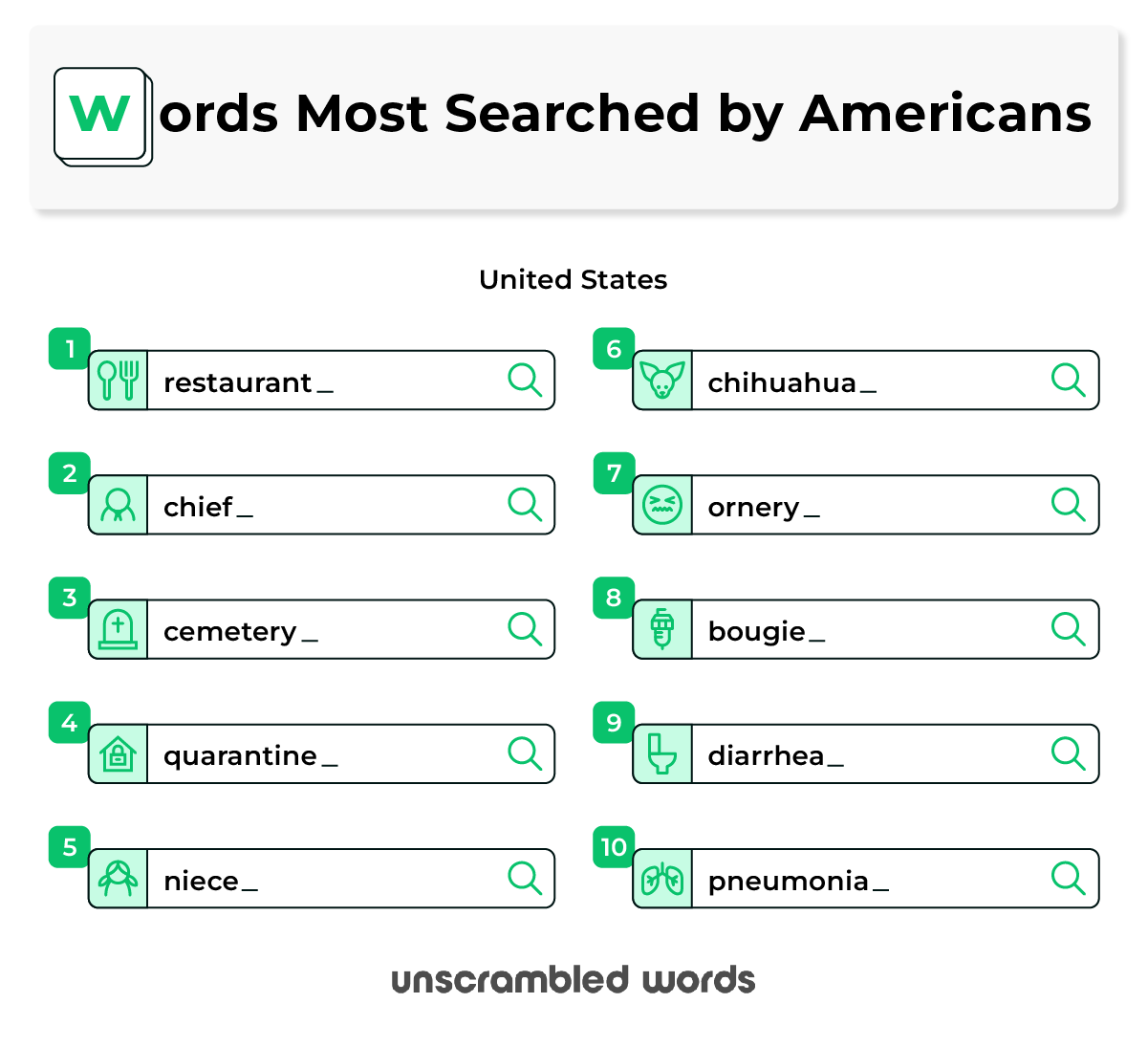 What are the top searched words by Americans nationwide? Restaurant takes the crown for #1 most searched, with chief, cemetery, quarantine, and niece shortly behind. Looks like “i before e, except after c” might have been excised from the Common Core, or maybe we’ve just unscrambled one too many words.

We surveyed Americans on spelling and when they need some outside help. It seems most Americans on a scale from “never” (1) to “every time,” (10) spell things correctly when they write, with just over half indicating 1, 2, 3, or 4.

Typing or texting is another story, with the majority of Americans falling squarely in the middle range of responses. It turns out autocorrect can be a huge help for clumsy fingers.

There are some words that we’ll just never get right - which is why 93% of Americans surveyed still do look up certain words. The words they’ll just always misspell? Top contenders include accommodate, broccoli, and convenience.

Yet the majority of Americans look up spelling infrequently- on a scale of 1-10, with 1 being “never look up words,” over half of respondents answered 1, 2, or 3. How do they do it? The overwhelming majority use Google, with a word processor spell check being the second most popular. Gone are the days of opening a dictionary, which only captured 7% of Americans’ choice of method.

While the U.S. doesn’t seem very keen to look up words, that might be because they let autocorrect do the work for them. Work smarter, not harder, right? 79% of Americans rely on autocorrect to correct their misspellings, and the majority of Americans use autocorrect more often than not.

Good thing, too- 3 in 5 say that they judge people who often misspell. 86% spell-check emails before sending, and a whopping 92% spell check documents before sending them. Text messages, however, get the short stick as only 62% proofread before sending.

Another red flag for 63% of Americans is knowing the difference between their/there/they’re, it’s/its, and your/you’re- they’ll judge you if you don’t. This checks out since 97% of Americans feel that you should know this difference.

All in all, though the dictionaries of the pre-digital era seem to be a thing of the past, America still relies heavily on outside sources to keep it free of error. While autocorrect isn’t always the answer- there’s certainly no autocorrect for Scrabble -  it certainly keeps us legible.

In September 2022, we surveyed 1,051 Americans to better understand spelling habits and how often they use autocorrect features. Respondents were 48% female, 50% male, and 2% non-binary with an age range of 18 to 84 and an average age of 38.

We analyzed more than 5,000 Google search terms and phrases related to spelling common words, such as “how to spell __” or “__ spelling.”. We looked at search volume per capita averages over the past 24 months for state-level data.

When using this data and research, please attribute by linking to this study and citing unscrambled-words.com